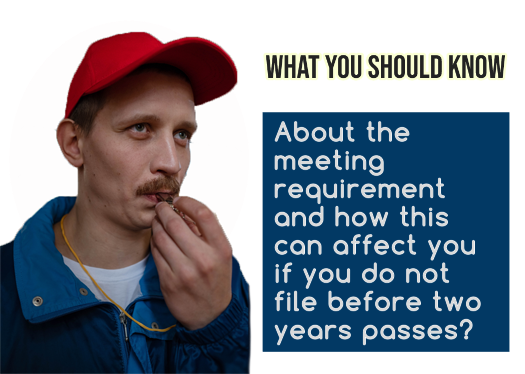 The K1 visa allows for a foreign national fiance of a U.S. citizen to come to the United States and marry. Once married, the couple can apply for the foreign national’s adjustment of status, work authorization and advanced parole.

Applying for these benefits will enable the foreign national to become a green card holder also known as a lawful permanent resident and eventually a U.S. citizen.

The K1 fiance meeting in person is the starting point of the process.

To start the K1 process, the couple must file the I-129F Petition for Alien Fiance with USCIS, and demonstrate that they intend to marry and that they have personally met during the two years immediately preceding the application.

What does extreme hardship mean?  Good question, hopefully the following will provide a better understanding.

First, it should be noted that the extreme hardship must be on the U.S. citizen.  Unfortunately, the hardship felt by the beneficiary is not important to USCIS in determining if the couple’s eligibility for this waiver.

What exactly is hardship?

Hardship can generally be described in one of three categories:

Determining whether a U.S. citizen will suffer extreme hardship is a discretionary decision made by USCIS and will be determined based on the facts presented in each specific case. Many would-be applicants have claimed that their financial position causes them extreme hardship in meeting the requirement.

Often, it is necessary to demonstrate that a beneficiary cannot fulfill the meeting requirement by coming to the United States to visit the petitioner and then return to the home country to await the filing of the K1 visa.

The waiver to the K1 visa application is often very difficult to obtain. Nonetheless, if you think you are eligible for a waiver, it is very important to consult with a K1 visa lawyer who can help you compile a sound argument for the waiver. Even with professional help the waiver has no GUARANTEE.

What would qualify for this waiver?

To help visualize what constitutes “extreme hardship”, something that is outside of the normal aspects of hardship, the following  hypotheticals situation would be able to help visualize:

The supporting documents help in demonstrating extreme hardship to the U.S. citizen and is regarded as high. Simply showing that meeting in person would be inconvenient, more expensive, or more difficult is not going to suffice.

Typically, the only time this sort of extreme hardship waiver would be approved is in a case where the petitioner was absolutely unable to travel anywhere, due to extreme illness or permanent physical disability. Proving this would also require substantial medical documentation.

Dangerous country conditions are also rarely grounds for a successful “extreme hardship” waiver of the meeting requirement. Even if your fiancé lives somewhere that is unsafe for a U.S. citizen to visit, USCIS will likely deny the waiver.

This is because, theoretically, you and your fiancé should be able to meet in a neutral third country. Even if your fiancé’s country only rarely issues travel permits to any country, USCIS will most likely not consider this to be extreme hardship.

The second basis for a waiver, that meeting the future spouse would violate strict marriage customs, is also difficult to obtain. Even if your fiancé comes from a culture where marriages are ordinarily arranged by parents, most cultures do allow some level of in-person meeting between the potential bride and groom.

If there is any precedent within the culture of allowing in-person meetings, then the waiver will be denied.

Waivers have a stronger possibility of being granted “if”.

Finally my thoughts of this situation are:

COVID-19 waiver? I think they’re unlikely to do that in this case because they don’t want to give the whole world an exemption of that requirement. There’s also a good possibility that when you apply today, a few months later it will get rejected.

Even if you’ve made a fabulous argument and have proof that your trip was canceled, the borders were closed and basically stating that it’s impossible for you to visit.

That would be a pretty good argument but because USCIS is sitting on these for about six to eight months before making a decision, there’s a good chance that at some point during that six to eight months, the borders will have opened up and you would have actually been able to travel.

My main concern about the risk to try doing this is that it’s a great argument now, but by the time you get there, they’re gonna claim you could travel and then they’re gonna deny it. Then, you’re still going to have to travel and do it that way.

So it’s something that could be tried. But so far, no one’s actually tried it and gotten a response yet.