USCIS has developed a new trick. 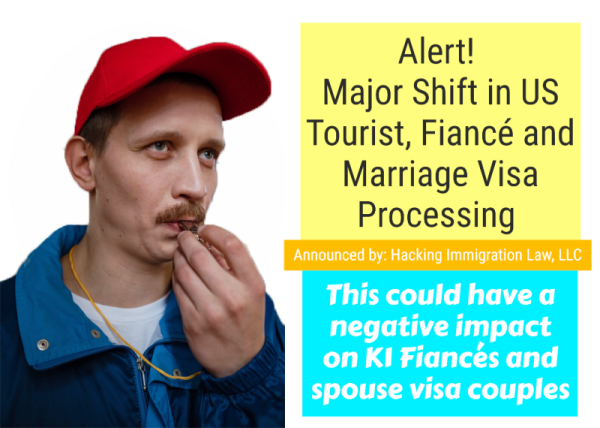 Now in order to understand this new trick, you have understand first how the process works. This is something that we’ve never seen before. We’re talking about situations where a U.S. Citizen married a foreign national overseas and wants to bring them to the United States.

First USCIS United States Citizenship and Immigration Service, and then the Department of State, DOS.  USCIS’s job is to figure out whether or not the marriage is valid.

That’s how it typically works. Now, here’s the trick. For the very first time we’ve learned that USCIS conferring and confabbing and checking with the State Department on prior visa applications before deciding whether or not the marriage is valid.

The States Department is now communicating with USCIS about foreign nationals, who had applied at an earlier date to get a visit visa, which often are denied and then maybe a few months later or even a year later it really doesn’t matter at this point the amount of time that has passed, but the State Departments job is to provide such information about a person to USCIS if their name comes up in the system?

The State Department for years have noticed a pattern of such people who get denied the visitor visa and then later they’ll show up again applying for either a K1 Fiancé or CR1 Spouse visa? However, it has always been the job of USCIS to adjudicate, decide. It’s USCIS’s job to figure out if this marriage is real.

Now, this is a really, really big deal. I can’t tell you enough why it is such a big deal. Theirs two reasons why.

The first is that people do this all the time.

This happens all the time. Now I would tell people, don’t try this. This doesn’t work because if your young and a marrying age, they think you’re coming here to get married and they’re not gonna give you that visa. But typically they’ve always treated that no harm, no foul.

They’ve never to my knowledge, use that as evidence that the subsequent marriage isn’t valid. So this is a really big deal because a lot of people try this trick. They try this step, and they think that they’re the first ones to figure it out. And now we know that the State Department is starting to use that against the couple when apply for the actual marriage visa.

So that’s one big problem.

“Hey, this person that you are thinking about giving an I-130 approval notice to, this foreign national that your U.S. Citizen has applied for, we want you to know, USCIS, before you decide whether the marriage is valid that this person had made a visit visa application.”

And they’re using it to send out RFE’s and to perhaps delay the case, or even deny the case.

Now, you may say to yourself, well this is just a one-off case. This is the first time you’ve heard about it. Yeah that’s true. And you might also be saying that the State Department might have picked on this fellow because the spouse and he got married on her very first visit to the United States.

And you might even say, well, we know that immigration fraud is a real issue in Nigeria at the moment and that this is a special case because this fellow is from Nigeria. All those things might be true. But throughout the years of watching USCIS we’ve learned is that when they try a new maneuver, once they tend to like it, and if they like it, they tend to expand it.

And they use it on a broader bases. And I think that is what might happen here. I think you gotta be ready for the fact that you might get questioned about visit visas, prior applications, and denials. So you gotta be ready, you gotta be smart and you have to always have a comprehensive plan for what it is that you want to get accomplished and you need to see the whole picture.

And now we know that not only is the State Department going back to look at prior visit visa applications, but they’re feeding that information to USCIS before the I-130 is even decided.

I hope you understand it.